On Sunday nights, a group of friends and I gather to play Dungeons & Dragons. This is the chronicle of their tale. (This post contains spoilers to “Curse of Strahd”)

The party gathers what items of importance they can from Khurz’s corpse. Y’shaarj insists that they bury him according to his religion – for Khurz was a cleric of Torm. They decide to take the body with them to the village of Krezk and try to find a priest who can perform the necessary rites.

Before they leave Yester Hill, though, Cairie the rogue spots something glinting within the 50-foot tall wicker statue of Strahd. Y’shaarj casts fly on her, so she goes up and digs a pinecone-sized, multi-faceted, green gem out of its chest. They believe this to be one of the three magic gems that Adrian and Elvir Martikov requested the party find for them.

With that, they all leave Yester Hill with Urwin Martikov, with Khurz’s body floating on a Tenser’s floating disc spell, and march back north to the Winery. Once there, they find that the remaining Martikov family have moved back inside, and the group is invited in to stay.

Urwin solemnly reconnects with his two brothers, and sister Stephania. Y’shaarj and Malis take Khurz’s body down to the cellar for the night. Malis crafts a rose out of flame for her fallen comrade, and then goes back upstairs to sleep. Y’shaarj stays with Khurz while he rests.

The party sleeps for the rest of the day and through the night – physically and emotionally exhausted. Upon waking, they all have a meager breakfast prepared by the Martikovs, who ask the adventurers what they will do next.

As the party recalls what Khurz had told them about Madam Eva’s tarokka reading, Krossa suggests they head to the drowned village to find the sword of sunlight. This is, however, where everyone believes Baba Lysaga lives, and the Martikovs advise against this move. That leaves the windmill, finding the wounded elf, and the two-headed man of music.

Y’shaarj also wants to head to Krezk to find a priest for Khurz. Malis suddenly remembers her vision while under the Feign Death spell, and reminds Y’shaarj that even if rites are performed, Khurz’s soul would not go where it was meant to go – it is trapped here in Barovia. Y’shaarj agrees, and takes the Martikovs up on their offer to bury him with Ismark and Davian. The group helps them do so.

That done, the group decides to accompany Urwin to Krezk as he makes a delivery of the last of the wine – three unspoiled barrels sat in a wagon in the loading bay and were untouched during the fray.

The party heads north to Krezk. Upon arriving, they are let inside and greeted by a very stern-faced Dmitri Krezkov, the burgomaster. The guards unload a barrel of wine from the cart and start wheeling it into the village on a small hand-truck. 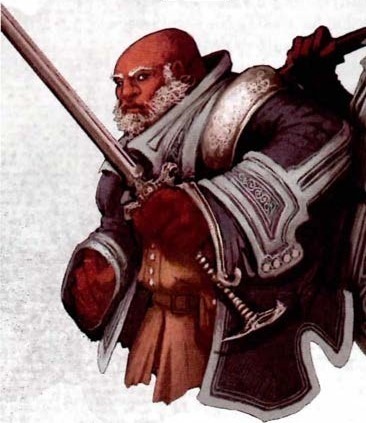 The party tries to converse with Dmitri as Urwin leaves them there, headed back to Vallaki, and they mention their quest to kill Strahd. Krezkov is not happy that foes of Strahd have come to his village, possibly bringing the devil-lord’s attention here and putting his people at risk.

The group says they are only here to escort the wine delivery, and possibly find a library. They are told that, should one exist, they are most likely to find it at the Abbey on the mountaintop. One guard steps forward and volunteers to show them the way to the Abbey. Krezkov agrees, and goes back to his business.

The old man identifies himself as Fletcher, and says he has been in Barovia for near a month, and has been attempting to figure out how he got here. He asks the group if they’ve seen Madam Eva, and they reply yes, and tell Fletcher of the items they were to find. He then produces a book he found in the old windmill, and asks if this is one that they seek. It is. Stunned, the group takes the book and Fletcher offers his services to the party.

The group reaches the top of the mountain, at the base of which lies the village of Krezk, and they approach the gates of the abbey. When they go through, they wake and startle two humanoid beings that appear to be a mix of human and several different animals. This takes everybody by surprise, but the creatures lead the group into the abbey’s main courtyard and then go off to fetch the Abbot for them.

This place seems one of horror to the group, as anguished screams fill the air from the surrounding buildings and sheds, and they find another being chained to posts in the courtyard. She has bat wings for arms and spider mandibles instead of a human mouth.

After a long time of waiting for the Abbot, who never shows, Y’shaarj gets bored, and heads to the larger of the abbey’s two wings – the East wing. Malis follows, and Fletcher stealths after them.

Inside this wing, screams and howling, mad laughter fill the air. They find a long, dark hallway that seems to be the origin of these sounds, and they wisely avoid it. Instead, they go upstairs and find an old hospital wing. As they explore the dimly lit space, they are attacked by something they cannot see….

And we’ve finally made it to Krezk! It’s been a long time coming, and I’m excited about the possibilities here. I was really hoping Ireena could’ve made it here, but…oh well. She’s dead now.

Seth rejoins the party as a new character with some crazy stats – I can’t wait to see how this plays out. He’s a fun, somewhat crotchety old character, and it’s quite amusing to watch him interact with the other party members.

The Abbey has been a kind of intimidating location for me as a DM since starting the Curse of Strahd campaign. The sheer number of mongrelfolk located here, as well as having to portray the complicated Abbot NPC, have all built up in my mind as this monumental task. But, with a little help from my wife, and some snap decisions, it’s all working out well so far.

I can’t wait for you to find out what happens next time! What is it that’s attacking the heroes? How will they handle this unseen enemy? Where is the Abbot and why is it taking so long for him to greet his guests?!

Find out next time! Until then, Well Met!

One thought on “Curse of Strahd – “The Coldness of Krezk””

Please leave all sanity at the door.

Just a girl and her dice.

The Worst Show on the Web

Keep Listening, It Only Gets Worse.

Gothic Adventures in a World Beyond Saving

Go Make Me a Sandwich

a blog about games, social justice, and rehabilitating broken communities