Happy One Year Anniversary to the Well Met blog! While I’ve been DMing for somewhat longer than that, I’ve been blogging about my DM exploits for a year now (well, on and off again). Thanks to everyone for reading along, and for checking out what I have to say.

So let’s get down to today’s post. Am I insane? Previous posts will claim yes. And here’s one more for the evidence pile.

Before, I mentioned that I started creating a “conlang,” or constructed language. I don’t have a name for it yet, but I’m currently calling it “the Ancient Language.” It’s supposed to be Akaar’s first language that the proto-civilizations developed after deriving words and meanings from the gods.

My goal with it is to develop it as much as I can in order to evolve it to create a derived language – kind of like how certain of our modern languages evolved from Latin, et al.

But I feel like that’s going to take a while…even though I’m making good progress. I’m utilizing the help of a book I got about conlanging – called The Language Construction Kit, by Mark Rosenfelder. You can find it on Amazon.

It’s been instrumental in helping me to analyze and break down language…though a lot of times it’s less effective at helping me to understand language and how it works. This is unfortunate, because you kind of need to do that in order to build one. The verbiage that Mark uses in the book is very collegiate, in that I can tell he’s spent a lot of time learning this stuff, and he’s teaching it from his level of education, and doing little to dumb it down for beginners, like me. It often leaves me very like…

However, despite the confusion, I have started building a Grammar (the set of sounds and rules of the language) and a Lexicon (the actual words and their definitions). At this point, I’m over 500 words into the Lexicon, and I have a general understanding of the Grammar. I haven’t determined all of the rules yet, as I haven’t started trying to translate things, and therefore coming across points at which I need to determine these rules.

What am I doing?

My main goal in creating the Ancient Language is to come up with a naming convention for the things, places, and people of Akaar. The book talks about this, and says that it’s totally possible to create a language solely for the purposes of naming things. I wanted to do this, but to also take it a step further and create an actual, usable language (again, because I’m insane).

I wanted to have names for things that meant something. That my players would – hopefully, eventually – be able to pick out and understand.

Here’s an example of the first place on my world that I named using the Ancient Language.

The splendor of the capital city that sits at the crook of a very large bay on the coast in the southwest of Errun. Here’s where it is on the map: 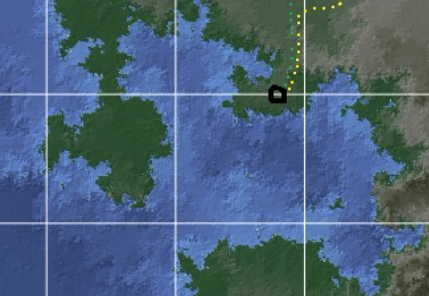 Basically the city boundaries would stretch all the way around the bay, making for a huge, sprawling metropolis that shines brightly in the sunset light. Since it sits overlooking the sea, I took my two words for “sea” – “safi,” and “to see” – “yuja,” and created “Safuja,” pronounced “sa – FYOO – zha.”

I really dig the name, and think the sound of it evokes the right thoughts and emotions in me to relate to the beautiful city.

Anyway, my advice to anyone wanting to start a constructed language is this: understand that there’s more to language than you may realize (unless you’re a linguist or some kind of expert). Different IRL languages are constructed in different ways, and have different rules. It may seem easier to build your language based on English rules, but English is a really tough language, in fact, and its rules conflict and don’t always make sense.

It’s also going to be a bit boring, and not sound very exotic, and it’s going to be full of exceptions.

I’m mixing in flavors of English and Spanish, as well as languages that change the meaning of whole sentences by adding prefixes or suffixes to certain words. It’s definitely a fun process, if a monumental one.

Translations… Sure, let’s try it…

Let’s see what happens when I try translating. I’m literally taking this for its first spin, I’ve not really tried translating with it yet, so I have no idea how this is going to go. Here we go!

Joe became bored with teaching and he looked for a new career.

That’s a pretty straight-forward one. I had to create a few new words in my lexicon to finish it, but that’s what it’s all about. In terms of sentence structure and word conjugation, this is very, very much like English. “Yuzite” is my verb for “he looked,” conjugated in the Spanish style (“te” being the 3rd person singular form of “he,” and “yuza” being the verb for “to look”).

Honestly, it’s kind of shameful and boring that the structure is so English. I might do the adjectives after the noun they describe, like Spanish does – so “soro huyun,” “new career,” would become “huyun soro.”

I’m also not sure I like having the singular “a” article, which shows here as “ab.” I may choose to drop it, since I have a variation on my nouns that determine when they’re plural. “Huyun” would be the singular “career,” and “huyunam” is the plural. The suffix “-am” serves as my determination of plurality. So, logically speaking, if the noun doesn’t have that plurality, there’s no need for a singular article to denote such, right?

That’s much cleaner looking, I like it. See?! Shaping and changing my conlang RIGHT HERE, live on the blog! Where else are you going to get this kind of gripping content!? Let’s try another one.

His father worked as a journalist.

This one was MUCH more complicated, and forced me to create a method of showing possession in the Grammar. Which I needed. So that was awesome.

The į symbol at the end of the first word is how I will show possession on a noun. “Akosabi” is the word for “father,” in Ancient, and I added the “te” for the third person singular “he” at the end along with the “į” symbol. Putting the personal pronoun (I, you, he, they) at the end of the possessed noun (“father” in this case) is how that works, and then you put that “į” at the end just to seal the deal. “His father.”

There’s not always a personal pronoun, so – for example – “dad joke” would translate to:

Most of my nouns end in the vowel “i” to help show that they’re nouns, but that’s not always the case. When it does, though, that last “i” is changed to an “į” to show that the next noun is owned by the previous.

The “į” is pronounced as “ee” just as the “i” is. It should be obvious when speaking that the last “i” is possessive. We’ll see. Again, as I continue to translate, I’ll find the need to modify the rules and create new ones. If I have to, I’ll find a way to change the pronunciation on the “į” character.

She yelled down at her arguing boys.

I currently don’t have a system for the different verb tenses, so I’m just using the straight verbs in these translations. I do think I want to have a way to denote past, present, and future tenses…but I think I want to do that for the whole sentence, somehow, instead of just on the verb like in English. Just haven’t figured it out yet.

So that’s my conlang, Ancient, so far!

It’s very difficult and sometimes frustrating – especially when my brain “rabbit holes” with it, thinking up a string of words that need to be added to the Lexicon. Or when I realize that most languages have different forms of verb tenses, and knowing I’ll need to do that too. Woof.

But it is fun. I am having a fun time figuring all this out, and putting it all together. It’s a good challenge, and one I’d recommend to my fellow world-builders if you’re wanting to try something new. Check out the book I got, and check out the Artifexian YouTube channel for that guy’s series on conlangs, it’s interesting.

I’ll have more world-building content and DM Advice for you soon! Plus, the continuation of my Curse of Strahd campaign diaries!

Until then – Yomba Kabo!

Please leave all sanity at the door.

Just a girl and her dice.

The Worst Show on the Web

Keep Listening, It Only Gets Worse.

Gothic Adventures in a World Beyond Saving

Go Make Me a Sandwich

a blog about games, social justice, and rehabilitating broken communities